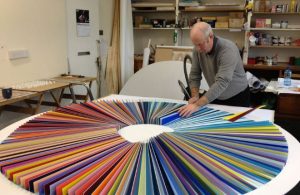 Since his first one man show in Dublin in 2002, Irish artist Peter Monaghan’s career has gone from strength to strength. Exhibitions in Dublin, Bristol and London as well as mainland Europe, Asia and the USA have attracted critical acclaim and commercial success.

His commissioned work can be seen in prestigious locations such as the V.I.P. Presidential Suite in Dublin Airport, the Gibson Hotel in the Point Village and the Beacon Clinic.

His submissions are regularly accepted into the Royal Hibernian Academy’s annual exhibition.

Peter’s work won national recognition in 2010 when he was awarded the National Allianz Business
to Arts Award for commissioned artists.

Collaborating with architectural firms such as Scott Tallon Walker and O.M.S., Peter has produced installations which are both aesthetically beautiful and problem solving.

Peter’s pieces work on a variety of levels. They move, they excite, they sing out, they intrigue. They are joyful and what they celebrate is the relationship between the creativity of the painter and the response of the viewer. Peter Fitzgerald in Circa Art magazine talks of the Ôviewer being empowered…the artist offers up a configuration of infinite possibilities. It is a humble thing to do as it puts the final agency back into the eye of the viewer. A humble artist, now there’s a thing! This humility is evident in Peter’s own description of his work, Ômy work is the result of a disciplined research into the experience of looking Ð the experience of pure visual sensation and aesthetic pleasure. However his conceptually rich work goes far beyond this and his exploration of the dynamism between 2d and 3d ask challenging questions about how we see art. Indeed Livia Hurley of the Irish Arts Review said of his award winning, site specific piece for One Grand Parade in Dublin, Monaghan even incorporates a natural element, sunlight, into his exploration of looking.

When reviewed in the Irish Times newspaper, Ireland’s premier art critic Aidan Dunne said of Monaghan’s work “This is a remarkable exhibition…everything is precisely calculated and impeccably executed…he devises beautiful chromatic harmonies and flowing patterns…blocks of repeated elements almost disguise subtle modulations that then take us by surprise”.

Peter Monaghan’s present success is the result of a life long immersion in many different aspects
of art. A graduate of the National College of Art and Design, he has worked as an award winning graphic designer, run his own graphics design business, worked as an art lecturer in the Dun Laoghaire College of Art and for the past decade, produced distinctive, sought after art pieces.